Astounding Image of Man and Whale
A Right Whale follows and observes a swimmer in the waters of the Auckland Islands. He turns his head carefully so as to bring his plate sized eye within inches of the diver. He is so gentle that he barely disturbs the water… with the merest flick of his tail, he could have sent the diver spiraling uncontrollably or crushed him like a bug. 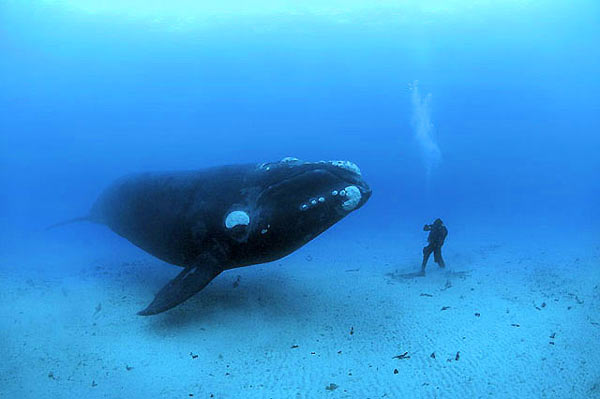 Right Whales: On the Brink, On the Rebound
From National Geographic: “Just a few hundred of these giants survive along the coasts of North America, but their numbers are growing in southern seas.”

“I’ve been diving for about 30 years, and I can honestly say that I’ve had some amazing encounters with sharks, squids, and other whales. But the encounter with the right whales in the Auckland Islands was probably the best thing I’ve ever done. It was just that amazing.

…I immediately suited up, jumped in—and these city buses swam up to me…

I’m standing on the bottom, and as it comes down, I get on my knees, lean over backwards—my scuba tank is now digging into the sand.

And of course their eyes are on the side of their heads, so it had to turn and look at me. It came within inches.

Here’s this softball-size whale eye looking at me. But then it stops—stops on a dime. It’s just hovering there, and literally one flick of its tail, and it would have crushed me like a bug. But it doesn’t. It was just highly curious.