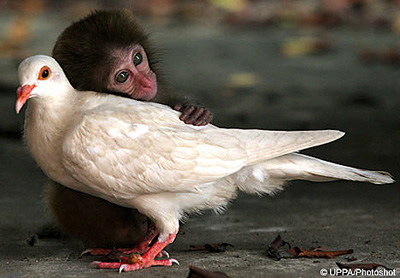 This is an absolutely extraordinary picture… A little infant macaque is “taken under the wing” by a white pigeon on China’s Neilingding Island in Guangdong Province.

Evidently, this little 12 week old baby monkey was separated from its mother and faced certain death until rescued by a refuge worker.

The story is that the baby was inconsolable until he was befriended and nurtured by the white pigeon, another resident of the shelter. It seems the pigeon understood the baby needed him or her.

They have become inseparable friends. The image was shot by Jianbin Huo of China, a photojournalist. Hopefully, the two will be allowed to spend as much time as possible together.

Macaque monkeys are very intelligent, sensitive and loving. They hold lifetime memories of family and tribe. This little baby may hold love and memories forever for his little friend.

Amazon Link: The Amazing and Beautiful Snow Monkeys of Japan - They play and live throughout the winter amidst hot springs.

This is a very beautiful book that chronicles the story of a special troop of Japanese Snow Monkeys as they live and play in a winter wonderland amidst hot springs in the mountains.

This book will touch you, make you laugh and steal your heart away as your see the imagery in full, large and intimate display and read about the monkeys as they dance in the snow, play with snowballs, bask in the sun, splash in the water and snuggle close together to keep warm and meticulously groom each other.

What is so especially captivating is their human-like qualities. They seem to have similar family dynamics with human emotions and expressions. This book captures such rare moments that will be unforgettable.

The adorable monkeys dance in the snow & bask in the sun. They climb & swing from trees. They chew leaves & joyfully play with snowballs, while the babies cuddle in their mother’s arms and nurse. They splash in the water and meticulously groom each other.

The generous array of pictures is absolutely stunning. Mitsuaki Iwago and Hideko Iwago, the authors, have captured the story, elements and photographs in an astounding display of color, pathos and beauty. As you progress through the book, it’s almost as if you’re there, living amongst a group of friends.

Included are details, notes, information in depth about the lifestyle, distribution, habits and living arrangements of these amazing creatures.

4 Responses to “Pigeon and Monkey”